I took two very interesting charts from Wikipedia to show how frequent each letter is used in the English language. 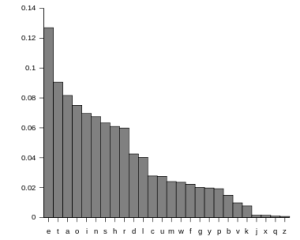 The least frequent vowel is u.

The most frequent is e.

To make this fun, I have a cryptogram: All you have to do is define each letter with the numbers below. Tip: Use the charts above to conclude which letters are used the most. The number that you see used the most is probably going to be one of the top letters on the chart.

If you can solve this cryptogram before the 30th of September you’ll be the winner!

If you have any other ideas for Monday Funday leave a comment below or if you need help figuring it out.